Toro Cup 20 was held April 30, 2022 at Toro HQ in Durham, NC.  The event started off with a bang.  Two Toro Cup veterans, Valerie Martinez (Lake Jiu Jitsu) and Samantha Schell (Schell Shock BJJ) started off with a fast-paced, intense nogi match.  Martinez got the win with a knee bar at 4:45, moving her Toro Cup record to 3-1.


Also earning submission bonuses for wins under 1:20 were Xzavier Atkinson (TFTC Academy) with a knee bar against Joey Ward (ZR Team) at 1:00.  As well as Nyla Harris (Mongrel BJJ) with a :35 arm bar over Elizabeth Turner (Grappling Club).


The most entertaining match of the day was between blue belts, Rebecca Jones (ZR Team) and Audrey Copeland (Triangle Jiu Jitsu).  These two had an intensity and fantastic pace that the crowd loved.  Each clearly train Judo as well as Jiu Jitsu, as they wanted to bomb one another through the mat!  Jones came away with the victory via armbar at the 5:45 mark.


Other notable wins were earned by Braylon Manuel (Diego Bispo) moving his Toro Cup record to 5-2.  Philip Paynter (Next Element Academy) moved to 3-0, while his teammate, Ethan Daily moved to 2-1.


Toro Cup commentator and former champ, Andrew Bitner, put down his headphones and returned to the mats to renew his rivalry with Bobby Gurley.  These big men put on a great show.  Bitner improved to 9-2 on Toro Cup.  He has the most wins in Toro Cup history.


The Corbe Brothers, Deandre and Gavin (Standard BJJ) were back on the famous “blue” Toro Cup mats.  Deandre had a long, tough fight against an always game competitor, Evan Arredondo.  Deandre forced Arredondo to tap to a heel hook after nine minutes of intense action. Gavin Corbe took on the “Giant Slayer” Estevan Martinez.  They had a wild, fast paced fight that ended with Gavin earning a 2-0 win.


Toro Cup 21 is scheduled for July 30, 2022.  Interested competitors should apply at www.ToroCup.com


Durham, NC: Toro Cup was back in action with their 21st event presented by Gov Smart, Saturday, July 30, 2022.
There were 38 action packed matches, highlighted with a World Title match between Gabriel Sousa and Gavin Corbe.

The day started off with two Toro Cup vets, Michael Costello (ZR Team) and Alex Lahman (TJJ), battling for 5 straight minutes until Costello forced Lahman to tap due to an arm lock.

Jillian Chalke (Checkmat Charlotte) bumped her Toro Cup record to 3-1 with a speedy 1:21 arm bar over Maggie Jones (ZR Team).  Chalke earned a $100 bonus for a submission  at 1:21 or under.

In a match up of brown belts, Timothy Carrico (Lake JJ) moved to an impressive 5-1 record on TC with a 2:07 arm bar over Joe Coleman (Verity BJJ).

Summer Carpenter (Charlotte JJ) improved her TC record to 3-3 with a quick and impressive win over the previously undefeated Anastasia Kouloganes, 2-1 (Standard JJ) with an arm bar at 1:03.  Carpenter picked up the $100 bonus for a submission  at 1:21 or under.

Philip Paynter (The Next Element Academy) continued his undefeated streak at Toro Cup.  The nogi specialist had a very game opponent in Trevor Price (Standard JJ).  The action was back and forth with Paynter moving his TC record to 4-0 with the RNC victory at 7:40.

Active east coast competitor, Nicole Mathew (Method Jiu Jitsu) made her Toro Cup debut versus the always tough, Taylor Sausser (Gustavo Machado).  Mathew was aggressive and came to fight.  Sausser was extremely game and battled back with strong attacks.  They had a constant give and take but at the 8:47 mark Mathew forced Sausser to tap due to a belly down ankle lock, dropping her TC record to 6-3

Jairod James (Diego Bispo), came in with a strong grappling background, including a NCAA Div 3 National Championship and a Division 1 second place. His opponent, Zach Mor (The Next Element Academy) proved to be a worthy opponent, displaying some strong wrestling of his own.  The action was fast paced. James came out with the RNC victory at 3:58.

Possibly the most impressive performance of the day came from Josh Grubbs (Revolution BJJ).  Grubbs was the heavy underdog against the always tough, D’Juan Owens (Elevate MMA).  Grubbs hit Owens with a quick double leg and from that point Grubbs was in complete control.  Forcing Owens to tap due to an awkward looking nogi baseball choke.   Grubbs moved his TC record to 4-0, while Owens fell to 5-2.

Aren Besson (G13) returned to the signature “blue mats” of Toro Cup with a dominant victory over Dahlion Poteat (Inman Health and Fitness).  Besson took charge from the start and kept attacking for 3:12, at which time Poteat was forced to tap due to a bow & arrow choke.

The crowd got an incredible treat when Vinicius Coimbra (ZR Team) and Andrew Kochel (Valley Jiu Jitsu) WENT AT IT for 10 minutes.  The level of nogi Jiu Jitsu displayed was outstanding.  Each of these men wanted to win.  The match ended with a 2-0 victory due to a sweep, giving Coimbra the win.

Two young and upcoming purple belts, Milo Ketterhagen (Caseraz JJ) and Mike Murray (Davidson County BJJ) had a fast and furious match.   Murray set up a sneaky baseball choke, while on bottom.  Ketterhagen moved to mount and his face began to turn pink, then red….yet he fought through it.  Murray was fully committed to the baseball choke.   Ketterhagen’s face turned an even brighter shade of red and then purple.  The crowd was nervous.  Suddenly Ketterhagen fell perpendicular to Murray and nailed a straight arm bar.  Murray was forced to tap at 2:12.  Ketterhagen moved to 2-0.  Murray to 0-1.

Is anyone paying attention to Adrienne Saunders?  The young blue belt now has 3 straight Toro Cup victories.  All by heel hook.  Her opponent, Rebecca Jones, is a tough, gritty competitor.  Saunders forced Jones to tap at the 1:33 mark.   Saunders previous Toro Cup match times:  1:00 and :52.  Wow.

The main event: Sousa vs Corbe.   Corbe was coming off a victory over Sousa’s ZR teammate, Estevan “The Giant Slayer” Martinez at Toro Cup 20.  Sousa was focused from the moment the match began.  The scrambles were frequent and skillful.   In the end, Sousa retained his Lightweight Nogi World Title with a 4-2 victory.  Sousa moved his TC record to 2-0, while Corbe fell to 6-1.

Do yourself a favor.  Go to FloGrappling and find this match.

Apply for a chance to compete: www.ToroCup.com 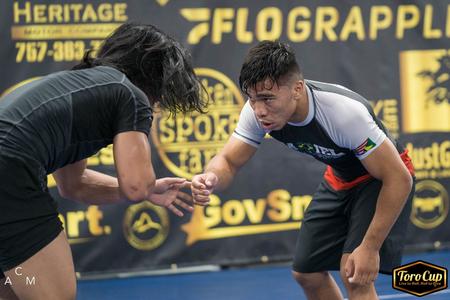